A Prayer on Covid19

Dear Lord, Covid19 has been creating havoc in the lives of so many people. So many people have lost their near and dear ones; their livelihood have been disrupted. O Lord, we pray for a solution to this disruption. In your wisdom and mercy, O Lord, let people be able to rebuild their lives again. Dear Lord, let healthcare professionals and scientist be given wisdom to find effective measures to contain the germ causing Covid19. Dear Lord, let people be given prudence to prevent spreading of the infection from one person to another. May you bring healing on this earth that you have created. Let people on earth realise their mistakes, and O Lord, in the days to come, let such germs remain where they should be. We pray for the leaders that you grant them wisdom to take political measures to bring healing and to stabilize society broken by Covid19. Dear Lord, in Jesus name we pray that your eyes would look on us favorably and our lives would once more be free of Covid19. Amen. 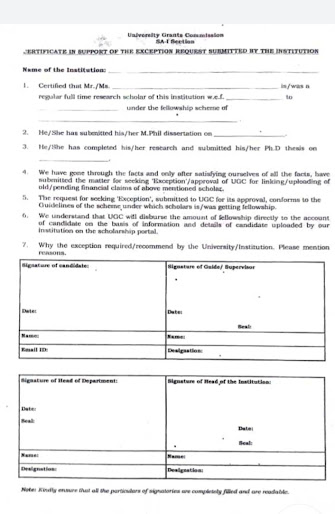 One can take a print out of this or make a form similar to this for use.
NB: This form is used to renew the fellowship when it has lapsed for more than one year due to medical reason or something of that sort. A friend of mine went to the Scholarship Cell to obtain this form, but was told that this form would be available with the UGC. The UGC official said that this form would be available with the nodal officer of the respective university. Both sides did not seem to the have the form. So, for the sake of easy accessibility, I put up the form here. As of 2020, this form is valid. Hopefully, the format may remain the same for years to come.  I see no reason why it should change.
Posted by Jeremiah A V Dumai at 10:29 AM No comments:

When Consensual Actions are Illegal

Many of the actions that are not harmful to others are not considered a crime even if it is harmful to the self. This is because liberty is an important category for a liberal democracy. So many of our actions are not considered illegal even when they may be deemed immoral or unhealthy. For example, smoking is injurious to health. There is no dispute with this fact. Yet, in a liberal democracy, smoking would not be considered a crime. This is so because the person's liberty trumps over the potential injury smoking may cause to the agent. Many people in the society would also consider watching of pornography or consensual sex outside of marriage immoral. But again these won't be consider illegal because the liberty/freedom of the agent trumps over certain other people's idea of morality. However, there are certain actions that may be consensual or is chosen by the agent for herself/himself and yet is illegal or must be considered a crime. What are some of those actions?

Consensual cannibalism is an example when an action is consensual and yet is considered a crime. There is a story of a person who offered himself to be eaten when someone sent out an invitation to eat a human being. The two agree that it was consensual and there is no coercion involved at all. Yet, the cannibal was arrested. You can google or read the story here: Victim of cannibal agreed to be eaten | World news | The Guardian.

Pedophilic action is another consensual action that deserves criminalization.

On a slightly different note -- because here it is not about two individuals choices, but an action chosen by an agent for herself -- one may impose some form of punitive measure for driving without helmet or seatbelt. Here, the agent may not harm anyone just by driving on the road without wearing helmet or a seatbelt. Even if there was an accident, it may harm the agent iherelf, not anyone else. Yet, punitive measure for not wearing seatbelt or helmet is fair.

Posted by Jeremiah A V Dumai at 8:59 PM No comments:

When we say 'secularism', it is often understood in different ways by different people. For example, in India there is this idea among some people that secularism entails respect of all religions. So some these folks say that no one should say this religion is bad/wrong; people need to accept that all religions are equally valid and no religion is more correct than others. Now this is a wrong understanding of secularism.

In order to remove confusion, we need to differentiate between political secularism and social secularisation. Let me explain what these mean.

Political secularism does have some sense of respect of all religions. But what is meant here is that the state should not discriminate any citizen on the basis of religion; the state should not say people of this religion cannot vote or people of that religion cannot have access to justice in the Court etc. Political secularism implies that the state is not going to discriminate any citizen on the basis of his or her religion. (As an individual I might say this belief of religion A is wrong or that practice of religion B is morally bad. But that's my opinion, not the state's opinion. As part of freedom of conscience that any citizen has, I can have my negative or positive opinion about this religion or that religion. But the state is not going to discriminate religious believers on the basis on his or her religion.) This is an essential aspect of political secularism.

The third aspect of political secularism is that citizens have freedom of religion. This is closely related to the second point. This says that since the state has no state religion, as religious institution and state are separate, citizens are free to choose this religion or that religion or no religion. The state will not dictate citizens' religious belief.

Social secularisation on the other hand is the transformation or state of society that is devoid of religious values. For example, if the atheists are successful in converting all the citizens into their way of belief, then that society will be a highly secularised society.

If the state is politically secular, won't the society also be a secularised/irreligious one? Not necessarily. Apart from the state, there are other institutions. One is family. The state can't dictate what religion a family must follow. So families can choose to be religious. Also there is civil society, and this includes clubs, churches, NGOs, Gurudwara etc. These civil society need not be irreligious; they can be religious too. Freedom of religion that political secularism offers allows other institutions to be religious within the bound of public order.

Posted by Jeremiah A V Dumai at 3:50 PM No comments:

Politicising food continues in India. Shivraj Singh Chauhan of Bharatiya Janata Party (BJP) ruled in Madhya Pradesh (MP) from 2005 to 2018. During the time he had refused to give egg to the school children. The policy was influenced by the fact that Mr. Chauhan believed in vegetarianism. This was driven by his personal religious belief.
In 2019, the Congress led government came to power. And during this brief period, the children were given eggs. The Minister had said that the government was just following the advice of the doctors who had said that egss are good for the children.
In 2020, after a year of being out of power, Shivraj Singh Chauhan's party was able to topple the Congress led government and returned to power. This allows him to reverse the Congress led government's decision to give eggs to the kids. Now it's back to no eggs for the school children. The government said that instead of eggs, milk would be given to the kids.
When it was in power some years back, BJP had also tried to prevent beef consumption in Maharashtra. It had tried to do that by criminalising possession of beef. After all to consume, one has to possess first. So without really criminalising consumption, it tried to criminalise possession. But this was struck down by the Court as unconstitutional. This means that a person can bring in beef from other state and cook and consume it. In this case, since it involves legislation, the Court has struck it down. Unless the Constitution is amended, beef consumption can't be criminalised.
However, when it comes to choices between eggs and milk, BJP has shown its preference for milk because of its religious belief. But a question emerges: is this a fair policy for a secular state?
To answer this, one must also take into consideration these questions: what is the benefit of milk vis-a-vis egg; and how does the cost factor weigh in? If the cost of milk and eggs are same plus the utility factor from medical perspective remains the same, then of course there is no way one can raise meaningful objection. (If we assume that the milk won't be adulterated.) But if egg is more beneficial and cheaper, then it is questionable. However, given that this is not a criminal act, the government would get away with the policy even if it is less beneficial.
But this also raises an important question: is it morally permissible for government in a secular state  to implement policies that are less efficient just because the policy is more in line with the religious ideology of those in power?
Posted by Jeremiah A V Dumai at 12:08 PM No comments:

Jeremiah A V Dumai
New Delhi, India
I have two MA degrees, one of which is in Christian Studies, as well as a PhD in Philosophy. Currently, I am an Indian Council of Philosophical Research Post-doctoral fellow at Delhi University.